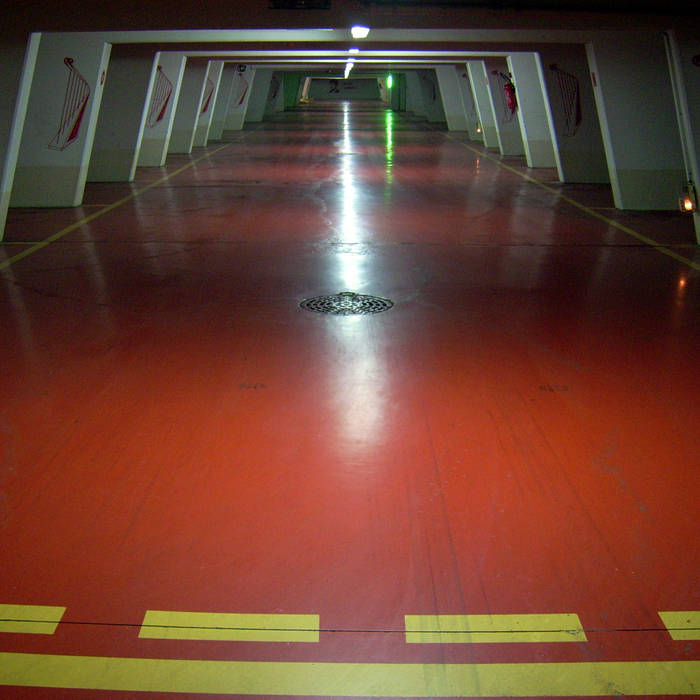 Parking comprises a site responsive improvisation recorded in an underground car park located at the edge of Parc de la Villette, beneath the Cité de la Musique, in Paris. The basic premise was to use a public space as a site of activation and play, free of the formal and commercial constraints of the institution under which the parking garage is posited. Parking features two instrumentalists, and two sound recordists, methodically interrogating the acoustic, spatial and material nature of this hard, colourless, functional space.

The project commenced by the group assembling late one Sunday evening at L'horloge, a bar on Avenue Jean Jaurès, before moving to the car park directly opposite. While no specific approach was formalised for the improvisation, we did settle on a one-hour timeframe in which to perform and record. Once on site we positioned ourselves in various locations to explore the mutable dynamics and spatial characteristics of the underground labyrinth. As we gradually probed the compressed space, different impressions formed through an entanglement of direct and reflected sound, musical and non-musical articulation, and environmental presences and ruptures.

The multi-level cark park affords an unconventional environment to work. It is a place naturally imbued with complex acoustics achieved by various volumes and arrangements of space. The division of the parking garage into compartments and thoroughfares facilitates unusual spatial effects that can be contoured in different ways. Its low ceilings, raw concrete surfaces, and modular design, however, can be disorientating. In our case we regularly lost our bearings, and more often than not each other, despite the omnipresence of musical sound saturating the space. While Dan and Jean-Luc explored a vocabulary of extended, multiphonic and antiphonal playing, Eric and I divided our attention between musical articulation and environmental sound.Neon lights, fire exits, air vents, turnstiles and vending machines, garnered as much interest as instrumental gesture and expression. The incoherence caused by the convergence of multiple sound sources was ameliorated by the highly textured concrete environment and its uniform infrastructure.

This stereo recording is derived from a four-channel version produced by synchronising the two independent recordings made onsite. While it does not quite convey the spatial complexity of the original multichannel version, it does reveal a rich range of aural possibilities proffered by the prosaic location. A place composed of stale air, dim lighting, fluttering air vents, and clouds of exhaust fumes. Unremarkable and familiar, yet a lovely counterpoint to the lugubrious acoustics, and overwrought architecture situated above.

For 25 years, while listening to the environment, I have been questioning the perception of reality and has tried to expand the notion of infra-ordinary (space-time at low intensity), from background noise to the inaudible passing by the wait.

Bandcamp Daily  your guide to the world of Bandcamp