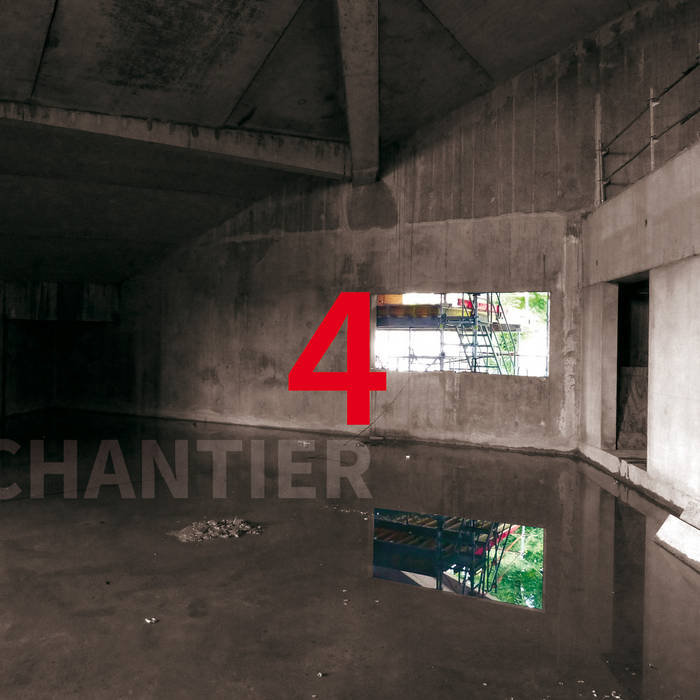 "Since 2010, the building site has been a space
where we question our practice, like workers.
Improvising with the background noise of the site,
the myriad sounds of machines, the gestures and
words of the workers, our research unfolds over
multiple sound territories, ranging from acoustics
to anthropology. "

It might also be that the group is called Chantier, and four just denominating the next work. The first was a CD for Another Timbre, two a French text and three a video. I had not heard of the group before, but the various members I do know. There is Eric La Casa on microphones and Pascal Batus on found objects, both present in these pages, one more than the other and Bertrand Gauget on alto saxophone also but that was all quite some time. His work is to be found in the world of improvisation. Here the trio heads out to an unlikely surrounding to record their work, the building site of the Philharmonie in Paris, along with the workers constructing they played their music and I assume with La Casa walking around with his microphones to capture various angles of this playing, of both his fellow musicians as well as the sounds from the builders. The three pieces on this release composed afterwards from the recordings they made, and it’s at that not some kind of documentation but rather an interpretation of the experience later on. These sixty-four minutes are quite a captivating listening experience; there is an excellent mixture of making sound on objects and instruments along with that capture in the space. The saxophone can be recognized, on some occasions, but sometimes not at all and it becomes another one of the objects that Battus plays or in fact the builders add in the far distance. Most of the time the sound is cavernous, wide open in this to be filled space, a temple of music, and on a very few instances very close by, in what seems like a finished small office. Perhaps that contradiction could have been done more, I think, wide open versus closed spaces. This is, besides captivating, something that is beyond description; is it musique concrete, sound art, improvisation, field recording or composition? Most likely, I would say, it is a bit of all of this. Played freely on the location, using some interesting spots on the site to record from and thus documenting the temporary site that is always changing, but using these recordings to compose something that never existed in the first place, a virtual building site with a lot of sound. This is a great release.
frans de Waard, Vital weekly number 1127, week 15

Released in 2012 on Another Timbre, Chantier 1 juxtaposed two studio recordings with five from a construction site tasked with erecting the Philharmonie de Paris. The idea was that Pascal Battus and Bertrand Gauguet would try and recreate the on-site recordings in a "neutral, silent space" by memory. This served as an interesting exercise that ultimately pointed to the richness of the construction site's own sonic identity, especially since the studio tracks were unexpectedly placed at the beginning of the album. In Chantier 2, Gauguet wrote that the chantier had its own autonomy, and that his and the others' presence had little effect on its "life." As such, there was little intent to "musicalize" it; to do so would undermine the detailed sound world already present.
Much like the five on-site recordings of Chantier 1, Chantier 4 finds the same three musicians submitting themselves to the location they're in, acting as mere participants of something much greater. Eric La Casa ensures that the editing and mixing are never ostentatious, highlighting the work of the musicians without obfuscating the music of the building site. In the liner notes, Battus makes an interesting observation: "As the building rises to remain, the building site rises to disappear." This description of the chantier as a transitory place where various people, sounds, and cultures could briefly intersect is a romantic one, and at the very heart of these recordings. Just as many performances take place in the Philharmonie today, the three musicians recognize how their current situation is no different: the creation of these concert halls is amusingly preceded by—and constructed with—a concert hall of its own. The absence of studio recordings narrows the listeners' focus on this revelation.
Chantier 4 begins with a few seconds of silence: an unexpected delay of sound that highlights the magnitude of space soon presented on the record. This initial burst of noise establishes the musical palette of the following hour, immediately allowing listeners to question whether the material being heard is sourced from the musicians or the workers. Since Battus and Gauguet improvise with the various crashes, buzzing, and chatter that frequently appear, much of the album's enjoyment is derived from how their instruments blend in with the current soundscape. Even so, there are plenty moments where their presence is more obvious—like the incessant clanging sound that Battus employs on "Phil harmonie 1," or the squeal of Gauguet's alto sax during a conversation in "Philharmo nie 2"—and made more memorable due to displays of playfulness.
The most compelling aspect of Chantier 4, however, is the decision to include numerous breaks in sound. This is accomplished in two distinct ways: a momentary silence, and an abrupt cut to a different recording. One is tempted to believe that this structural device is a mirroring of the compounding slabs of reinforced concrete and metal that make up the Philharmonie itself (further hinted at by the word's bifurcation in all three track titles). The moments in which we hear these breaks are, at times, impossible to miss (namely, whenever silence is utilized). Still, they never deter one from perceiving everything as a unified whole. Interestingly, there is at least one point where the presence of a break is ambiguous. Near the beginning of "Philharmo nie 2," Gauguet's sax loudly howls and it's unclear whether he simply decided to interject or if the instrument is utilized like mortar to join two different recordings.
Regardless of the actual truth, this uncertainty is in line with another purpose for the segmented structuring. As noted by the liner notes, it's meant to represent the "differentiated spaces both listening and memory pass through." The construction site has disappeared, and it's not possible for Pascal Battus, Bertrand Gauguet, or Eric La Casa to experience the "performance" they took part in ever again. In affixing different recorded segments, they've constructed an album that mimics the hazy but evocative act of remembering a specific musical event. In a sense, they've condensed the conceit of Chantier 1 into something more compact and self-sufficient. More than ever, the chantier feels alive.
Joshua Minsoo Kim, www.toneglow.net/reviews/2018/5/1/battus-gauguet-la-casa-chantier-4-swarming, May 7 2018

When I was in Paris 2013 - 2015, the second apartment in which I stayed was on Rue Adolphe Mille, which more or less ran along the western border of the Parc de la Villette in the 19th Arrondissement. On the opposite side of the park, the new Philharmonie de Paris, designed by Jean Nouvel, was nearing its long-delayed completion. Eric La Casa, a master of in situ field recording/performance, lived just up the street as well and, in 2013, ventured into the site with percussionist and objectiste Pascal Battus and alto saxophonist Bertrand Gauguet. Their sounds largely blend into those produced by the environment, which include the general, wooly urban hum, the percussive noises of construction work and the voices of the workers themselves among many others. You can pick out likely contributions from Battus (though I'm sure some I think are his, aren't and vice versa) and the occasional reed flutter or thin keening of the sax, but all is pretty much of a piece. The recordings, as always captured superbly by La Casa, were then reworked, remodeled and collaged by Battus and Gauguet. The result is a soundscape at one hyper-real and phantasmagoric, rich, deeply plied, and absorbing, densely filled with sounds both recognizable and obscure, entrenched in the city yet isolated from it. Excellent work, among the best I've heard from all three of the musicians.
Brian Olewnick, Just Outside May 2018

Special Thanks to all the workers, during our sessions
With the support of La Cité de la musique - Philharmonie de Paris :
Laurent Bayle, Christophe Rosenberg, and Patrice Januel
Les Ateliers Jean Nouvel
Thanks to Julien Bordier, Soline Nivet, and Christian Barani

For 25 years, while listening to the environment, I have been questioning the perception of reality and has tried to expand the notion of infra-ordinary (space-time at low intensity), from background noise to the inaudible passing by the wait.

Bandcamp Daily  your guide to the world of Bandcamp